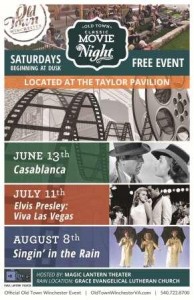 WINCHESTER, VA – This summer the City of Winchester, Tech Team Solutions and the Old Town General Store are joining forces to bring the community three outdoor Classic Movie Nights at the Taylor Pavilion.  These free outdoor movies are hosted by Magic Lantern Theater and will begin at dusk.

·         June 13th, “Casablanca” – This film won three Oscars in 1942 and is rated by the American Film Institute (AFI) as the third greatest American film of all time.  Its iconic moments – the song “As Time Goes By,” Rick’s café and the final airport scene have become part of American popular culture.

·         July 11th, “Viva Las Vegas” – This is regarded as one of the best of the Elvis Presley films thanks to its vibrant musical numbers and the chemistry and energy generated between Elvis and Ann-Margaret.

·         August 8th, “Singin’ in the Rain” (AFI’s #1 Movie Musical of All Time) – Arguably the best evocation of Hollywood on the verge of talking movies and a hugely entertaining series of memorable performances by Gene Kelly, Debbie Reynolds and Donald O’Connor of some of America’s greatest songs.

The Taylor Pavilion is located just off the Loudoun Street Mall, directly behind the historic Taylor Hotel building and a few steps from the Braddock Autopark.  In inclement weather, the showings will be held at the nearby Grace Evangelical Lutheran Church, 28 W. Boscawen Street.  Attendees are asked to bring chairs and blankets for seating.

Tech Team Solutions and Old Town General Store Classic Movie Nights mark a return of the Magic Lantern Theater (MLT) to outdoor showings downtown after an absence of several years.  Formed by a group of volunteers in 2001 to bring a greater diversity of films to the local community, the MLT has expanded its offerings over the years to include the classics, foreign and domestic independent productions and documentaries on various public issues.  In addition to Classic Movie Nights, MLT offers regular screenings at the Museum of the Shenandoah Valley, the Barns of Rose Hill, Veramar Vineyards and more.

For more information about the Outdoor Classic Movie Series at the Taylor Pavilion, please contact the Old Town Welcome Center at (540) 535-3660 or email welcome@winchesterva.gov.