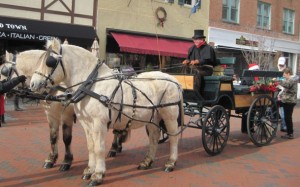 Start the holiday season in Old Town! Join us on November 30 at 7pm for the annual holiday parade and tree lighting. The parade will follow Piccadilly Street to Braddock Street to Cork Street. A very special guest will conclude the parade and join us all on the Loudoun Street Walking Mall in front of the Old Court House Civil War Museum for the lighting of the Old Town tree! It is sure to be a special evening!

A number of street closures will be in place to allow the bands, floats, and of course Santa Claus to make their way through the city.  The following streets will be shut down at 6 p.m. and will reopen immediately following the parade.

Traffic will be diverted one block from each of the closures.  Parking restrictions go into effect at 4 p.m. in areas marked with “No Parking” signs.

The parade gets underway at 7 p.m.  Parking is available for $5 (cash only) at any of the four downtown autoparks:

We wish everyone a safe holiday season!