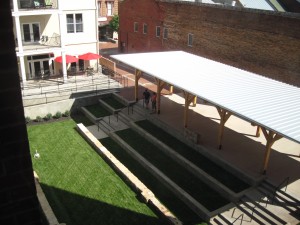 Nestled behind the historic Taylor Hotel building on the Loudoun Street Pedestrian Mall, the Taylor Pavilion, a brand new venue in Old Town Winchester, offers an open air venue with tiers perfect for outdoor seating. There is a concrete stage area as well as a wood frame covered pavilion. It is a perfect venue for small wedding parties, concerts, and other events accommodating over 200 people.

History of the Taylor Hotel property:

Bushrod Taylor built and opened the Taylor Hotel in 1848. Located downtown on the Valley Pike (modern US 11), the hotel served travelers and was a base for mail and passenger stagecoaches from at least 1850. General “Stonewall” Jackson used the building as his first headquarters in the fall of 1861 while commander of the Valley District. Following the First Battle of Kernstown in March, 1862 and the Third Battle of Winchester in September of 1864, the hotel was one of many buildings crowded with wounded.

A fixture of Winchester’s downtown through much of the twentieth century, as a theater, department store, and telecom center, the building had been vacant since 2004, and its condition had deteriorated, especially after a partial roof collapse in 2007. In 2010 the City Council condemned the property as blighted and unsafe. Then, as the City Council took action to move forward, there was significant citizen participation and discussion of the merits of demolition versus renovation and the best design and use of the future project. After the declaration of blight, the City Department of Economic Redevelopment began working on a plan to save the original historic hotel, raze the dilapidated additions, and create a public pocket park in their place.

In 2011, the Winchester Economic Development Authority purchased the blighted Taylor Hotel with the intent to re-establish  the building into a successful and contributing member of the Loudoun Street Mall.  Due to the middle portion of the building being collapsed, renovating the historic structure proved to be a challenge. After many years of waiting, the people of Winchester will once again be able to enjoy this vibrant and significant piece of Winchester history.  Through the use of historic tax credits, federal and state grants, and private investment, the City’s Economic Development Authority began the restoration efforts in the fall of 2012.