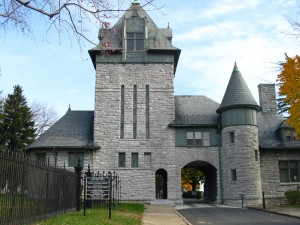 Mount Hebron Cemetery is a unique community institution. It is a complex of four adjoining burying grounds embraced within a common enclosure.

Five acres of land, adjoining on the east of the old Reformed and Lutheran cemeteries, were purchased and Mount Hebron Cemetery came into being with elaborate ceremonies marking its dedication. It was named after Hebron, that city of refuge where Abraham, the patriarch, the father of the faithful, purchased from the sons of Heth the cave of Machpelah for a “possession of a burying place.” There he buried his beloved wife, Sarah, and there generation after generation of his family brought their dead for burial. (Genesis 23 and 49:29-50:14)

The original five-acre plot has been expanded by successive purchases of adjoining land until today the Cemetery enclosure extends to fifty-six acres. It includes all the land eastward from East Lane to Pleasant Valley Road between Woodstock Lane on the north and Cork Street on the south