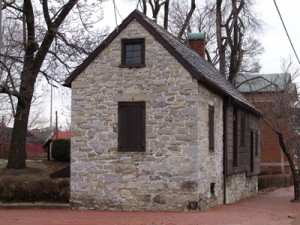 George Washington used a little log building, now the middle room of George Washington Office Museum, as a military office from September 1755 to December of 1756 while Fort Loudoun was being constructed at the north end of town. Washington planned Fort Loudoun, supervised the work and brought his own blacksmiths from Mount Vernon to do the ironwork. The fort was a redoubt with four bastions; there were fourteen mounted cannon and it covered one-half acre. It was made of logs filled with earth and inside there were barracks for 450 men. A well was sunk 103 feet through solid limestone rock to supply the fort with water. This well is all that remains of the fort today.

Located on the grounds of the museum is a cannon that was left by General Edward Braddock in Alexandria. It is among a number of artifacts displayed at the office. The current exhibit is entitled “George Washington and the West.” This display includes some of Washington’s personal effects, surveying equipment and a scale model of the town of Winchester circa 1755 which shows the fort prominently located at the north end of the town.

Winchester played an important role in George Washington’s early adult life; his military and political career began here. As a young man of sixteen, he came to the area to begin what he thought would be his life’s profession, surveying. With the earnings from his surveying business he was able to buy a number of acres around Frederick County and also a lot in the town that enabled him to serve as a Burgess From Frederick County 1758-1765. During the French and Indian War he commanded the Virginia Regiment from his headquarters in Winchester.