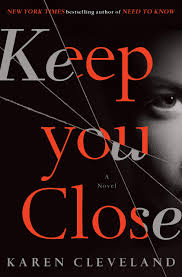 She knows her teenage son isn’t perfect. But when the FBI starts investigating the kid she thought she knew, will she jeopardize her own career at the Bureau to keep her child safe? From the New York Times bestselling author of Need to Know. Stephanie Maddox makes tough decisions every day. She has her hands full heading the FBI’s Internal Investigations division, policing wrongdoers within the Bureau. But, as a single mother, the most important thing in her life is her teenage son Zachary, who’s anxiously awaiting college acceptance letters. So when she discovers a gun concealed in Zach’s room, her world reels. And then an FBI agent on the domestic terrorism squad shows up at her door and utters three devastating words: “It’s about Zachary…” Has she been wrong about her near-perfect son? Is Zach embroiled in something criminal–something deadly? And, if so, what is her greater duty: To protect him? Or to betray him?

Karen Cleveland spent eight years as a CIA analyst, the last six in counterterrorism. She has master’s degrees from Trinity College Dublin, where she studied as a Fulbright Scholar, and from Harvard University. She lives in northern Virginia with her husband and two young kids