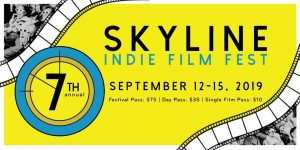 Today, Skyline is simply a festival. A great little scrappy indie film festival that focuses on the exhibition and presentation of new, undistributed indie films in an awesome community.

This independent film festival based in Winchester, Virginia brings the best in new, undistributed indie film from around the corner and around the world!

The 7th annual festival runs in venues across Winchester from September 12th to the 15th. Venues in Old Town Winchester include the Espresso Bar & Cafe, Dharma Studio, and the Bright Box Theater.

The opening night kicks off with a Prosecco toast and reception on Thursday, September 12 at 5pm.

For a full schedule of events and list of featured films, visit www.skylineindiefilmfest.org.