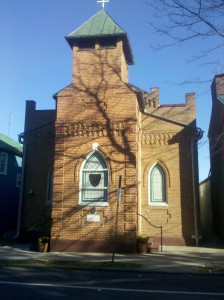 Saint Paul African Methodist Episcopal Church was organized in 1867 and is one of the first fifty chartered A. M. E. Churches in America. It was organized in the home of Randolph and Katherine Martin. The precious history of Saint Paul is caught up and nurtured in the historical architecture of the Church at 428 North Loudoun Street. This is true because the church is on the same site, and in the same edifice where it was erected in 1887.

The organization of the church is Contemporaneous with the first session of the Virginia Annual Conference. Saint Paul is one of Winchester’s Historical Buildings. It is the only designated landmark in Winchester owned by African American people. It is a family church and it is rich in the history and tradition of the struggles of Black people who have come from tributary living to mainstream existence.

Among those gathered at the establishment of Saint Paul was a man by the name of Robert Armistead who later became the first pastor of the church. Attending this meeting was Josh Barnett, one of a number of colored landowners at the time. Wanting to do something to help the cause of establishing a new church, Brother Josh Barnett was moved to donate a parcel or lot of his land holdings and designate it to be the site of the new church. That lot is the same property on which the church stands today. Before the edifice was built, the members of this small congregation met and held prayer meetings at one house then another. When the basement was dug and the foundation was built, the members were so pleased that they decided to board over the basement so that they could hold services; which they did for several years until the sanctuary was built.

Years later, the vestibule and bell tower were built which houses a 650 pound bell. After some years of hard work, the pulpit and choir loft were also added.

Over the 144 years history of the church, it has served as an important focus in the community. Several bishops and minister have visited this church through the years and it is also believed that Frederick Douglas, an AME Congregant, visited as well. In recent years, members of the congregation have served on the Winchester City Council, as well as provide leadership in key city and area non-profit organizations.

Our forefathers paid all that they could afford to make an investment in the future for the Christian life of their children’s children. That investment was, and is, immeasurable. Through the years, many pastors have given of their time and energy that they might enhance the work of the ministry and cause the people of God to be strengthened in their spiritual lives.

May God continue to look down on and keep Saint Paul, that it will always be a shining beacon bringing lost souls to Christ.