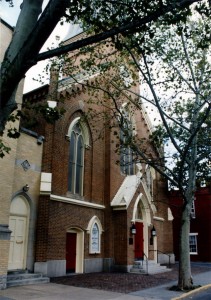 Under the constant blessings of Almighty God, Grace Evangelical Lutheran Church has proclaimed the gospel of Jesus Christ in many and various ways for more than 250 years.

After receiving a grant from Lord Fairfax, dated May 15, 1753, the German Lutherans first built a log schoolhouse to educate their children.  It was not until April 16, 1764, that the cornerstone for the first church building was laid. The Church was destroyed by fire in 1854 when sparks from a nearby stable set fire to the roof of the church.  The remains of the stone walls are standing today in the cemetary.

The present location of the church was secured in 1840 and a new church was built in 1842.  Originally built to serve as a lecture hall, the two-story brick building was the largest meeting place for miles around.  During the Civil War it was used by both Southern and Northern forces.

This congregation’s story is one of a Christian community gathered around an evangelical faith transplanted from the Rhineland hills of Germany to the Shenandoah Valley of Virginia.  Its story is one of men and women, all baptized and some ordained, struggling to be faithful to God’s Word whether facing wilderness harshness or modern secularism.