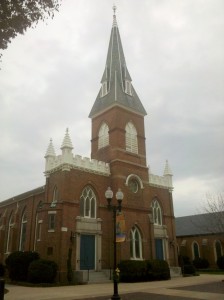 Presbyterian Christianity in the northern Shenandoah Valley followed the stream of Scotch-Irish immigration from Delaware and Pennsylvania south and west into Virginia.  In 1736, the Rev. Samuel Gelston or the Rev. James Anderson, both of Pennsylvania’s Donegal Presbytery, organized the Opequon Church near Kernstown, south of Winchester.  The record is unclear as to whether one or both of the men were responsible.

In 1788, Presbyterian Christians residing in Winchester began to worship at the newly constructed Old Stone Church at the corner of East Piccadilly Street and East Lane.

In 1826, a congregation of former members of the Old Stone Church was organized as the Kent Street Church.  A church building was erected at the corner of Kent and Boscawen Streets.  In 1827, the Rev. David Hunter Riddle was installed pastor of the Kent Street and Opequon Churches.

In 1839, a group of Presbyterian Christians from the Kent Street Church began to meet in the Philip Bush Hotel next to the Streit House on Cameron Street, known at the time as Market Street, owned by John and Abraham Mills.  In 1841, the 34 members of what was now the Loudoun Street Church called the Rev. Andrew Hunter Holmes Boyd to be their pastor.  Also in 1841, the congregation built a “lecture room” – currently the sanctuary – on Loudoun Street.  The “lecture room” was the beginning of a permanent home for First Presbyterian Church.

First Presbyterian Church honors its rich heritage as it looks to its promising future.  Visitors will recognize the names from the congregation’s history throughout the church facilities – Donegal House, Hill’s Keep, the Kent Room, Loudoun Hall, and Boyd Chapel.