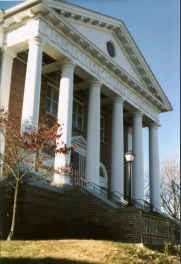 The earliest records show that in 1742 the first Baptists came to the Valley from New Jersey and established a small colony of about fifty people twelve miles north of the present site of Winchester. Twelve years later, the Rev. Stern came to Winchester and organized a church. As far as we can tell, there were twelve members. With but a few periods of missing records, we can trace the history of the First Baptist Church of Winchester, as well as the history of Baptists in the Valley. The New Jersey-established church and Rev. Stern’s church were the first Baptist churches west of the Blue Ridge Mountains.

From 1790 to 1900, the records reveal the names of sixteen different ministers with the church meeting in not less than five different locations. In February 1928, the church moved into its present building on the corner of Washington and Piccadilly Streets. There were 200 active members at the time. In 1950 the Miller House was torn down and Youth Center, now called the Children’s Education Building, was erected.

The church parsonage, located on Piccadilly Street behind the main church building, is now the church office, and the building next to it, called the 301 House, houses our Youth Ministry. The church also owns a 340-acre retreat about 15 minutes from Winchester called the Hunting Ridge Retreat, which was purchased in 1959. The retreat is used year-round for church functions and by visiting groups. The church operates a half-day weekday preschool, begun in 1945, that is known as the “Son”Shine Learning Center. In 2004 the church established a relationship with a Latino congregation, the Primera Iglesia Bautista Peniel. The congregation has the use of our facilities and our financial support.

Throughout the years since our founding, First Baptist Church has been an enduring presence in downtown Winchester. We look forward to the future with hope, knowing that God has more work for us to do.