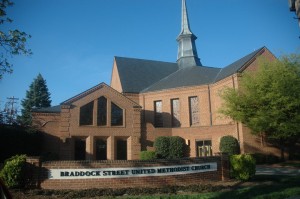 Increasing Sunday school sizes as well as pre-school and Parents Morning Out programs stretched the capacity of the Education Building. The new Braddock Center opened in January, 1994 at a cost of $2.9 million. This center added an Adult Care Center, infant and toddler care, the scout room, the chapel, the library, choir room, offices, adult Sunday school rooms, a kitchen and a fellowship hall/gymnasium-all enabling Braddock Street to reach out in faithful ministry to the community and beyond.

Three services are offered each Sunday where we can worship together. The 8:30 a.m. and 11 a.m. services are our traditional services, and we also offer a contemporary service at 9:45 a.m.

Special services are held throughout the year to highlight the seasons of the Christian Church, such as Christmas, Easter, Pentecost, and World Communion Sunday.

In the rare event that conditions make local travel hazardous and prevent us from gathering, please listen to 92.5 WINC-FM for service schedules.