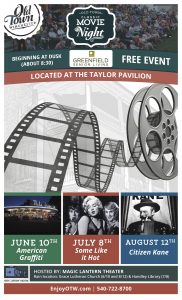 On Saturday, June 10, Old Town Winchester opens its summer Classic Movie Night in downtown Winchester with the beloved 1973 film, “American Graffiti” at dusk (approximately 8:30 p.m.) at the Taylor Pavilion.  Considered as one of the top 100 American films of all time, this George Lucas feature stars Richard Dreyfuss, Harrison Ford and Ron Howard as high school graduates about to enter the problematic world of the early ‘60s and includes some of the era’s most memorable music.

The showing is screened by the Magic Lantern Theater and sponsored by Greenfield Senior Living and is free and open to the public.  Attendees should bring their own chairs and/or blankets for seating.  In case of rain, the showing will move to the nearby Grace Evangelical Lutheran Church, 28 W. Boscawen Street.

Classic Movies at the Taylor Pavilion:  Just off the Winchester downtown walking mall.  Free and open to the public June 10 – “American Graffiti.”  The beloved 1973  nostalgic look back to the ‘60s, its music, mores and memories.  Directed by George Lucas. July 8 – “Some Like It Hot.”  Billy Wilder’s timeless 1959 comedy, starring Jack Lemon, Tony Curtis and Marilyn Monroe. August 12 – “Citizen Kane.”  Orson Welles’ epic masterpiece of 1942, often rated as the greatest American film of all time.