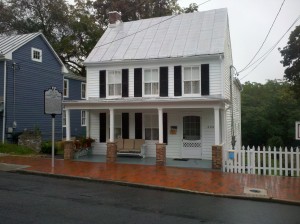 The world-famous singer lived in this house from November 1948 to June 1957, the longest time period that she lived in any one place.

The nonprofit, CPC owns and operates the house to preserve and perpetuate the memory of this legendary singer and her music. The house opened to the public in 2011.

The house will be open for tours from 10 a.m. to 4 p.m. Wednesday through Sunday during the month of April.  Days will be added in May.

Visitors will see how Patsy lived with her family, consisting of her mom Hilda Hensley and sister and brother, and how her career started when she won the Arthur Godfrey’s Talent Scouts TV show.

Patsy was a trendsetter throughout her career and was the first woman to wear slacks on the Grand Ole Opry stage in Nashville.   This year a pair of her slacks will be on display at the house.

In addition, she was honored with a segment of PBS American Masters series in March throughout the country.  The local connection was part of the documentary with scenes from the house and details about her life in Winchester.

Also, a Patsy Cline Museum opens in April in Nashville in her honor.  CPC assisted with the new museum’s acquisitions, loaning items from the local non-profits collection.

Volunteers are always welcome at the Patsy house. Call 540-662-5555 or email celebratingpatsycline@gmail.com.

The position of house manager is open at this time. Applications are available at Patsy Cline Historic House Facebook page or email CelebratingPatsyCline@gmail.com.  The position process is open until filled.